Watch a short documentary about us. We were chosen by the initiative aroundtheworld.coop among 12 other inspiring coops in the world.

„Dobrze” Food Cooperative is a rapidly growing grassroot food initiative in Poland. As the first and grassroot cooperative in the country we run shops with organic and seasonal food. Are shops are members-based, however remain open to public.

The first shop was opened in 2014 and the second one in 2016. Both are based in centre of Warsaw. „Dobrze” Food Coopeartive strives to create an alternative to supermarkets and luxury organic stores. Our shops are shared property of the members who govern it according to international cooperative principles. As for mid 2020 our cooperative gathers 357 households, employs 15 people and cooperates with around 20 small-scale farms during a year.

Besides social entrepreneurship we are developing an educational program aimed at promoting alternative food systems, in particular food cooperatives. In 2018 we launched a pilot project dedicated to young farmers. During the training cycle, we presented the opportunities resulting from organic production and short supply chains. In past years we’ve been involved in advocacy in favour of small-scale farming in Poland and leading campaign on negative effects of corporate food distribution system. We are a founding member of the Nyeleni Polska Food Sovereignty Network.

★In 2020 we open a system for online orders with deliveries
★In 2021 we open our 3rd location i nWarsaw – coop store  connected with Coop Social Centre
Can you support us? Read how to support us.

We believe that direct cooperation between consumers and producers contributes to strengthening active citizenship and creates fair economy, beneficial for all involved parties.

★In 2018 we launched a pilot project dedicated to young farmers encouraging them to organic production and short supply chains
★ In 2017 we introduced senior discount – for the eldery people who are not members of our coop
★ In 2017 we were orginising campaign called ‘Why I do not buy in supermarket?’
★In 2016 we became a member of Nyeleni Polska Food Sovereignty Network.
★In October 2015 we organised Food Coops Gathering dedicated to solidarity economy and food democracy
★ In July 2016 we opened our second shop in center of Warsaw
★In August 2014 we opened first community owned grocery store in Poland, based in center of Warsaw

How do we function?

Our shop belongs to and is managed by its members. Each of us works in the shop three hours per month and contributes a monthly membership fee. This way we are able to lower the logistical costs and, as a result, the cost of food available to our members.
As for mid 2020 are a diverse community of more than 350 households, which means we are a diverse community of  ca. 500 members whose efficient collaboration is based on clear sets of benefits and duties.

★ We have reduced our waste production – instead of plastic bags we use reusable packaging and we compost organic waste
★ We have organized more than 70 educational and community building events
★ We have received award for the best non-governmental initiative voted by Warsaw residents as well as an experts’ prize
★ We are debt-free (both shops were opened thanks to donations from members and community via crowd-funding platform)
★ We are widely recognized as a practical alternative for both supermarkets offering industrial food as well as expensive ecological groceries
How are our groceries different from a regular stores?
★ Our groceries are jointly owned by all the members of the cooperative
★ Non-members have the right to shop in stores
★ All members have equal vote in matters concerning the growth of our initiative (by attending strategic meetings and general assemblies)
★ We operate thanks to membership fees and voluntary work of our members
★ Members buy food at reduced prices
★ All profits are used to finance our growth and fulfil our statutory objectives
★ We buy seasonal food directly from our suppliers – trusted organic farms
★ As much as possible we strive to ensure that our food is sourced locally
★ We organize educational and community building events

Our history
The Coop was established in July 2013 by only three people. More people willing to develop the initiative joined after the first open meeting. In the beginning the Coop functioned as a non-formal  group simply through organising weekly group purchases of healthy, eco food coming from local  farmers. Throughout the first year of activity, regular meetings were held in a makeshift shop set up in spaces shared by some friendly NGOs. In the meantime the idea of opening a coop shop started to take shape.
As new memebers were joining, ground rules were developed. The group was registered as an official asociation and successfuly rented a communal space in the city centre of Warsaw. A crowdfunding campaign was organised which ensured the financial resources necessary to renovate the future shop. In August 2014 Poland’s first grassroots coop shop since 1989 was launched! It is located at Wilcza 29a in Warsaw. The shop is managed collectively by all members of the „Dobrze” Food Coop Association – already 170 people and constantly growing. 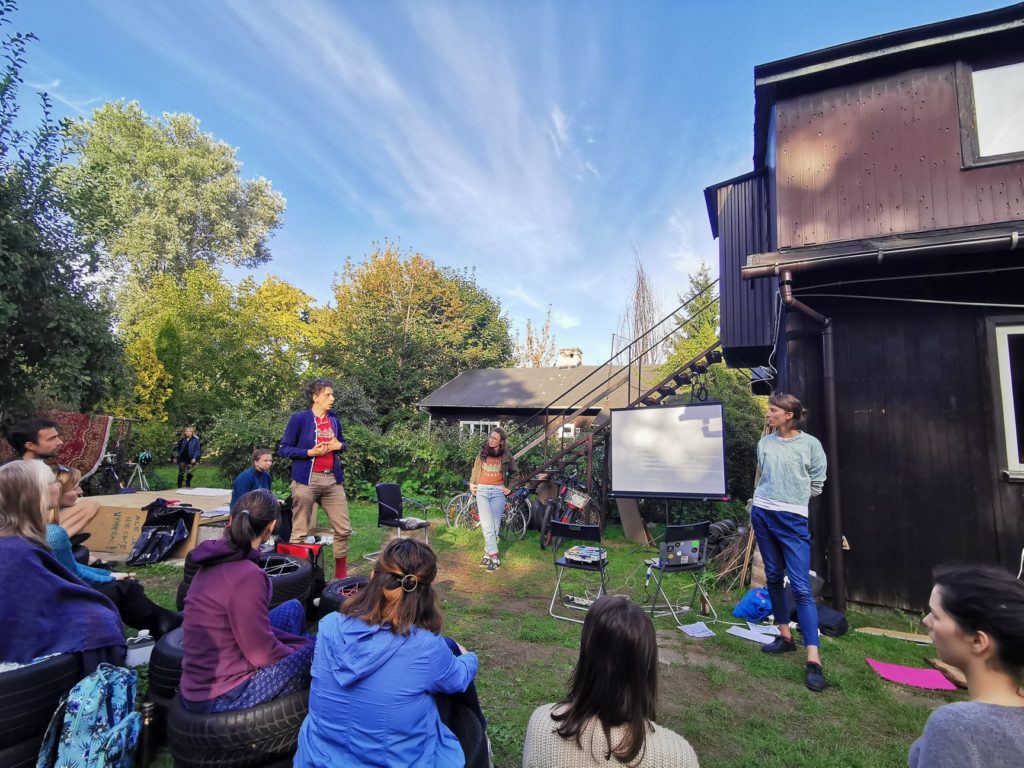 During our General Assembly meeting 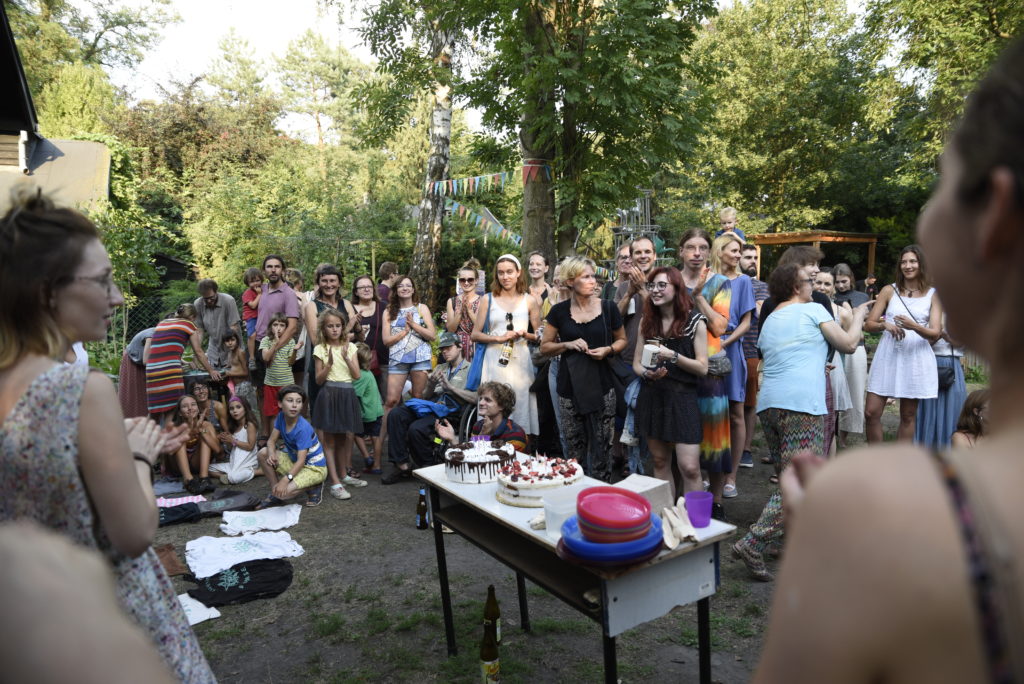 During our birthday picnic

Read how to SUPPORT US